THE QUALITY CHARACTERISTICS AND THEIR HIERARCHY

THE BEST VARIANT SELECTED WITH PUG

THE DETAILED DRAWING OF THE PREHENSOR

PLANNING THE QULITY OF THE PRODUCT

THE CALCULATION OF THE GRASPING FORCE

THE DRAWING OF THE ENSEMBLE 2D

It is required to design a three fingers prehension mechanism from an industrial robot structure in order to handle cylindrical parts.The mechanism is pneumatic actuated.It is imposed to incorporate a force sensor in the fingers.

The studied mechanism is THE SWING-BAR MECHANISM .

It is very important that the transmission systems used in the case of industrial robots to maximize the strength of the system in parallel with the minimization of weight , inertia and elasticity.Transmission systems represent the main source of vibrations , dry and viscous friction ,which lead to significant energy losses within the robot mechanical system.

Further, I am going to compare the swing-bar mechanism with the gear mechanism , for example.An important aspect , when analizing the mechanisms , is the friction , as I have mentioned above ,too.From this point of view the swing-bar mechanism has less friction between its elements than the gear one (the gears in motion have a high friction between their teeth and from this comes a high wear in time ,too).Some of the main advantages of the swing-bar mechanism are : it has a good accuracy (at the geared one this depends on the teeth) ;it has a low gauge and a small weight (the elements are lighter than the gears) ; it is still , it isnt noisy (the gears in motion are producing a lot of noises) ; it has a simple structure (it has no complicated shapes or elements). 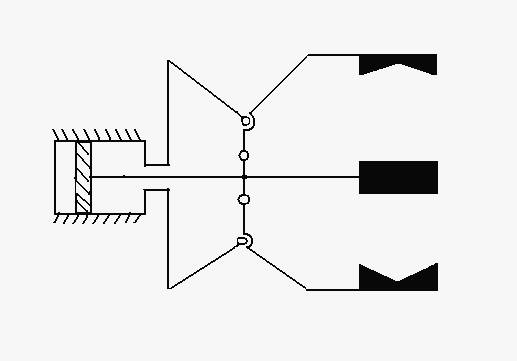 This variant of the swing-bar mechanism has the following component elements:

a pneumatic cylinder with a piston for the translation motion ;

a bar wich makes the connection between the piston of the pneumatic cylinder and the three fingers wich are actuated with the help of:

the fingers with special ends for grasping the cylindrical parts. 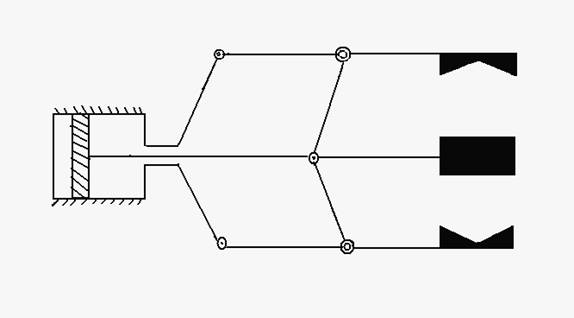 This variant of the swing-bar mechanism has the following component elements:

a pneumatic cylinder with a piston for the translation motion ;

a bar wich makes the connection between the piston of the pneumatic cylinder and the three fingers wich are actuated with the help of:

the fingers with special ends for grasping the cylindrical parts.

the functioning principle is based on ,the moves that the piston is making ,the to basics

moves to the left and to the right.the gripper has on the piston three mobile joint to

treansmit the move,another three mobile joints on the three fingers at their middle and the

three fixed joints at the beginning ,when the piston goes to right the fingers wiil open and

when the piston goes to left the fingers will close. 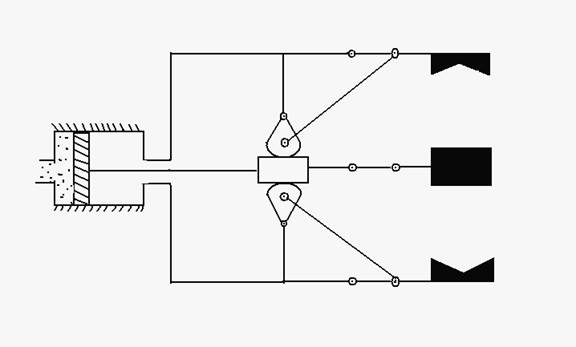 As it can be seen in the drawing(the variant) above this mechanism is formed of:

a pneumatic cylinder with piston , which makes a translation motion;

a swinging-bar which motion is simultaneously with the motion of the piston , this bar is in reality with teeth ;

three fingers at 120 degrees distance one from another , with a special form at their ends for manipulating cylindrical parts ;

The functioning for this first variant :

THE QUALITY CHARACTERISTICS AND THEIR HIERARCHY

To obtain quality is necessary a lot of work and a lot of skill to accomplish some requirements,you need to follow certain criteria.These criteria , after settled , they need to be ranked in order of their importance-for example with AHP method.The quality requiremqnts for the swing-bar mechanism are :

EASY TO ATTACH ON THE ROBOT FLENGE

The following step in the process of designing will be ,the introducing of these requirements into an program named Qualica qfd ,to be more precise the AHP method .

This method is used to assure a n easy ierarhizations of these requirements ,having as a result ,a ierarhization takent into account the importance of each characteristic in the process of designing ,to obtain an competitive module an competitive gripper .

So, in the next page will be presented the AHP that was made for this ierarhization,and the explinings appropriate to him. 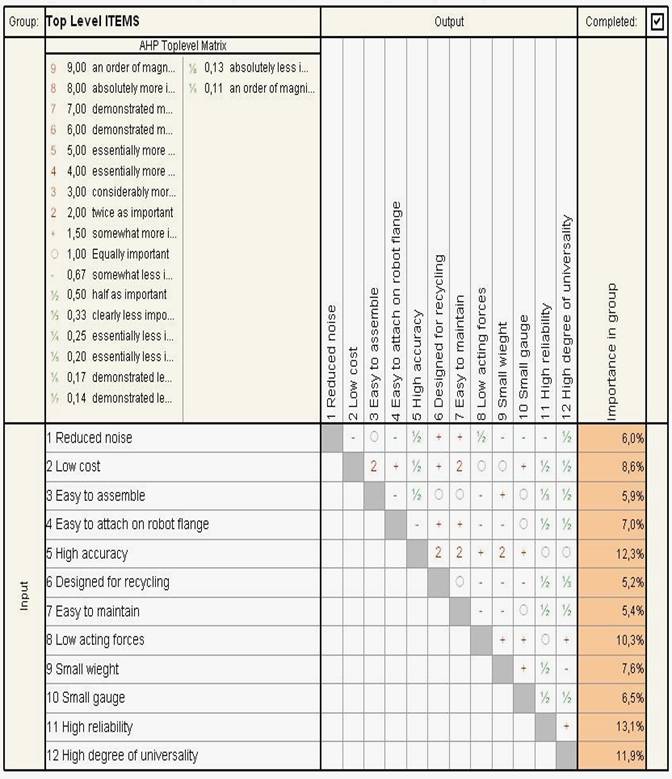 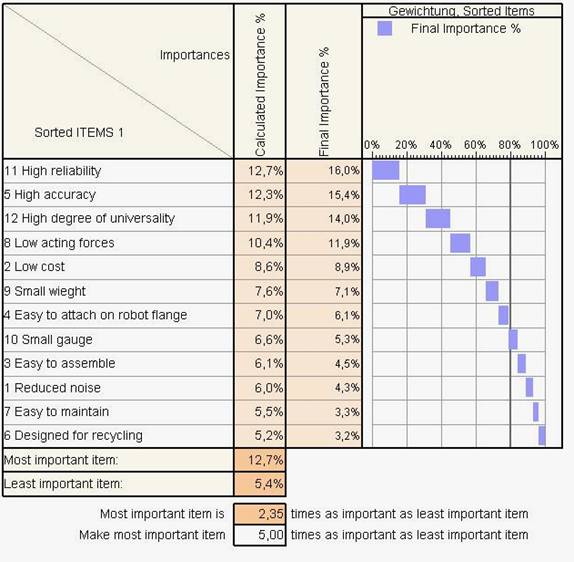 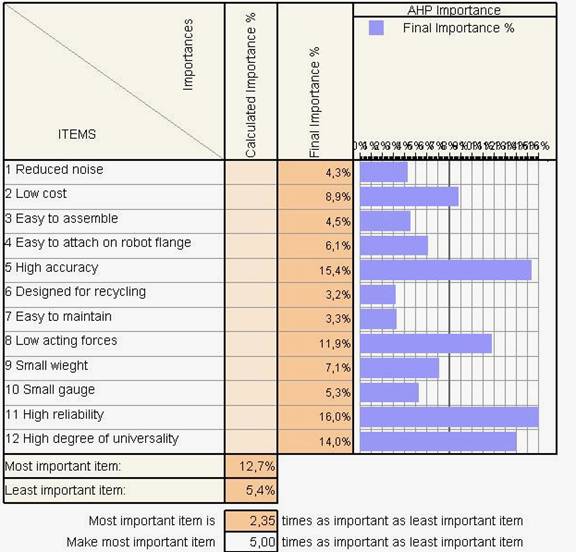 After completing the AHP method the results are :

THE BEST VARIANT SELECTED WITH PUGH

This is the final variant that was choosen with pugh method:

this variant will be further analized ,presented as a detailed draw and a 2D final drawing.

the method pugh from the Qualica package help us to make a ierarhization of the good and wick points of each variant offering us at the end the better solution ,solution that without this program had been difficult to analize and choose the better one, that is recommende to use special programs that help us to find the bettewr way,the optim way , for a good designing of the prehension mechanism .

THE DETAILED DRAWING OF THE PREHENSOR 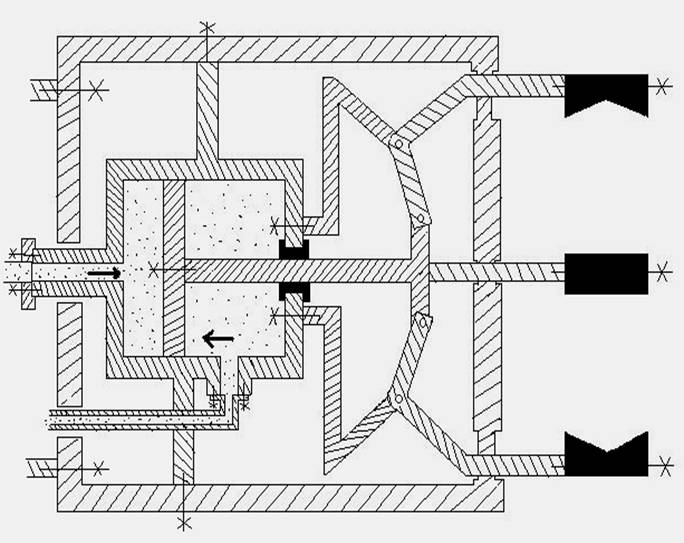 PLANNING THE QUALITY OF THE PRODUCT WITH QFD METHOD

THE MOST IMPORTANT QULITY CHARACTERISTICS

THE NUMBER OF COMPONENTS 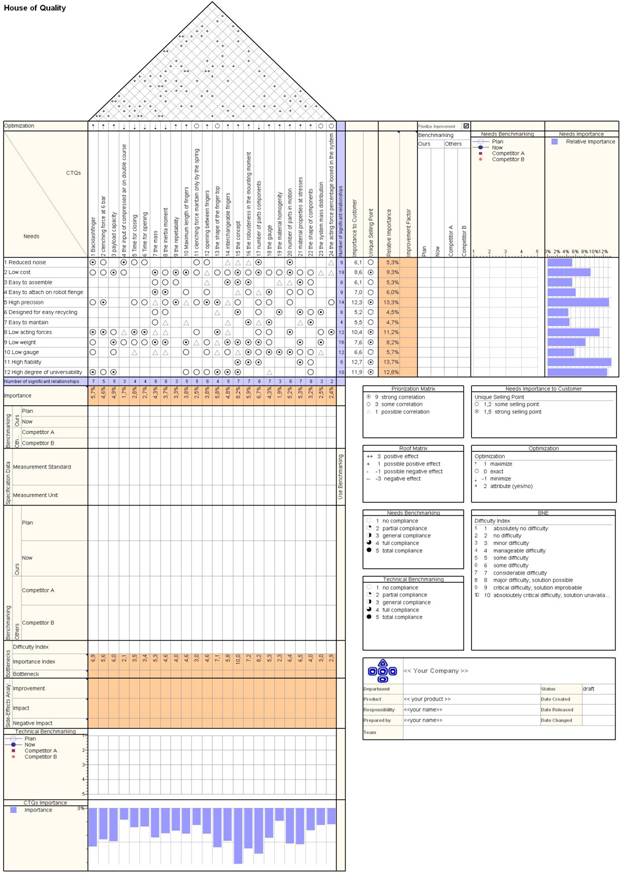 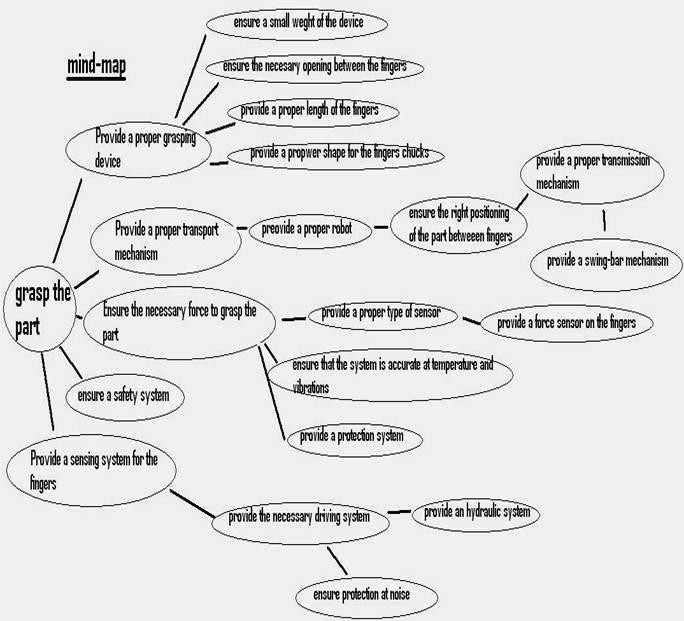 This method was applied to help us to complete the first QFD from the page 15, QFD that will also be helped in making it by another method the FAST method that will be presented in the next page (page 17). 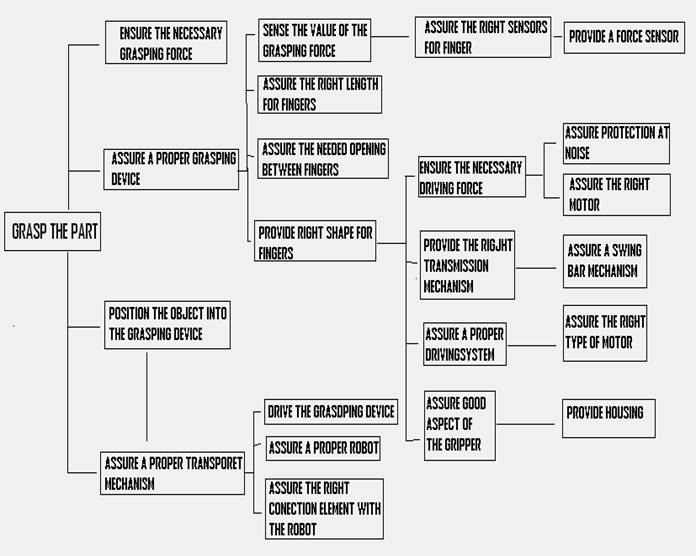 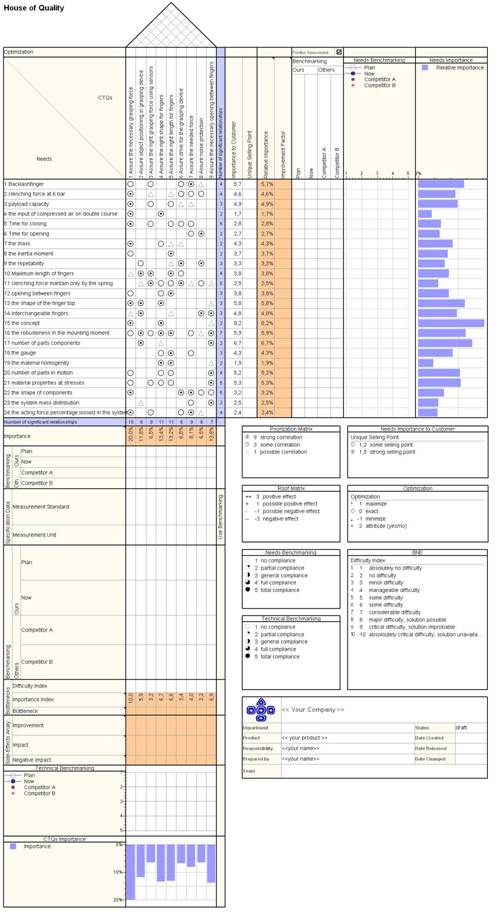 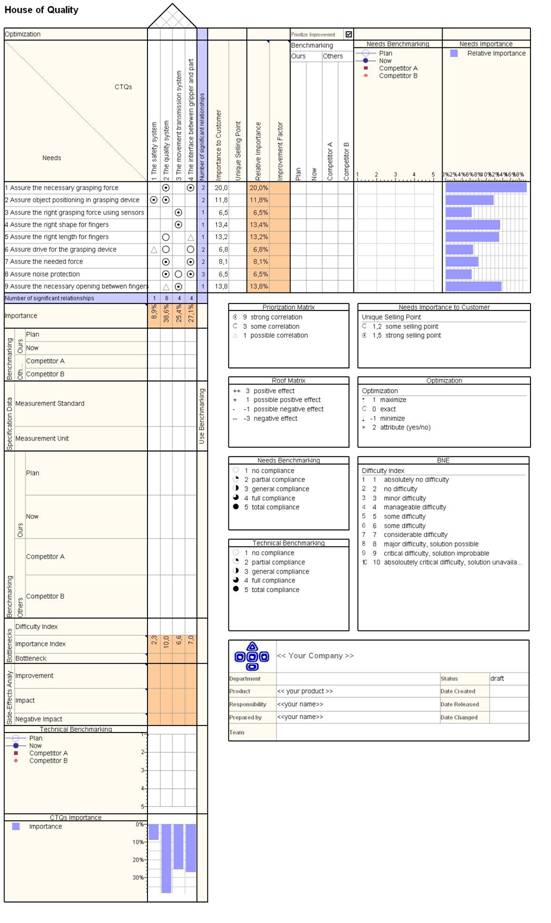 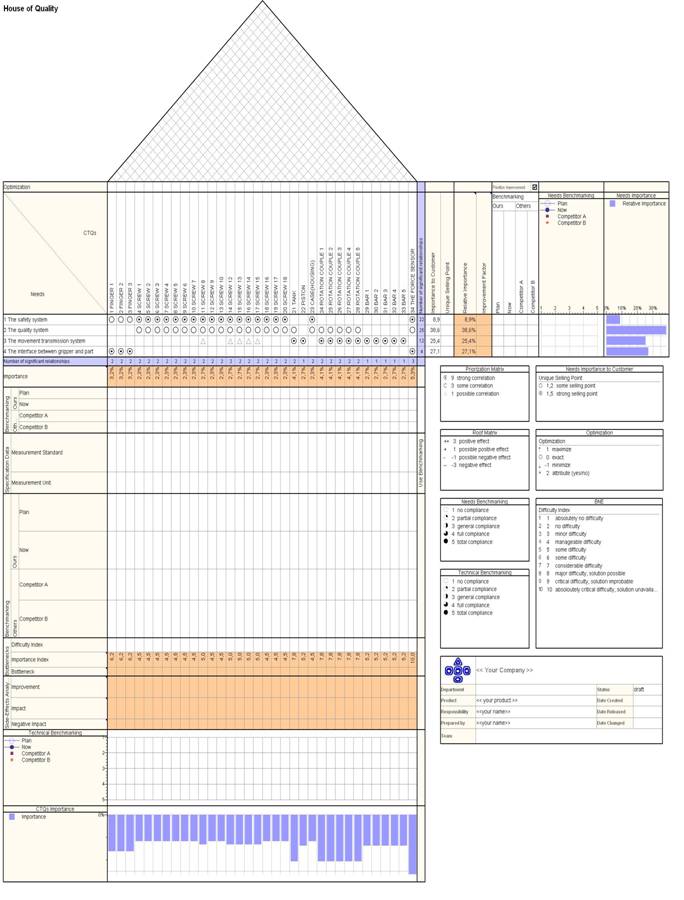 THE CALCULATION OF THE GRASPING FORCE

Because the calculation of the grasping force includes two diameters ( Dmin, Dmax) the calcutions will be made for each diameter once for Dmin , and once for the Dmax :

c) Now finally we will calculate the grasping force, because we have all the data we need:

2) The calculations for the second diameter:

This percent give the importance of each component in the project and reporting to those 1000 $ we will obtain a value for each component.there will be two colons one with the calculated prices (method presented above ; taken from qfd),and the real prices of components,in this way obtaining two gripper costs : one calculated and one real .

Because we need to measure the grasping force we need a force sensor; I have chosen the sensor Flexi force A 201, and placed on the finger tip between the finger and part.The sensor and its characteristics will be presented below:

It is an ultra-thin sensor , flexible , customizabile and cost-effective (4 sensors=55$).

Further will be detailed some catalogue data for this sensor:

See recommended drive circuit. In order to measure forces above 100 lbs. (up to 1000 lbs.), apply a lower drive voltage and reduce the resistance of the feedback resistor (1 kΩ min). 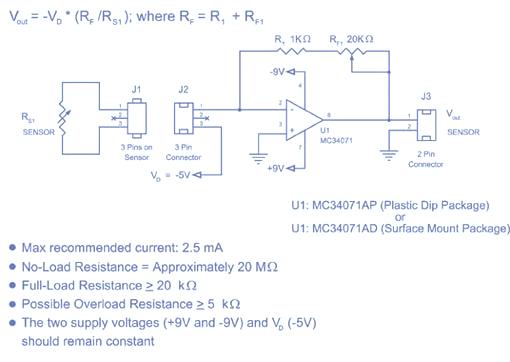 Fig.14.2 Data from the catalogue about the sensor

THE DRAWING OF THE ENSSEMBLE 2D

The drawing will be presented separately on a A1 sheet.