The report presents different types of actions that aim to ensure the long term conservation of large carnivores in Piatra Craiului area. Main actions are: lobby and stakeholders consultations, electric fencing of local shepherd camps, livestock depredation monitoring, ecological camps, information and public awareness. The activities were carried out by using an integrated approach focused on prevention and mitigation of possible conflicts between wolves, bears and lynxes and livestock breeding activities. The specific results of each action were integrated in a set of conclusions that was used for the elaboration of the guidelines for large carnivore management in area. These activities are replicated in other Romanian areas (see LIFE Nature in - LIFE Nature 02/NAT/RO/008576 - time period 2002 - 2005) and, on local level, will be continued by the park administration.

The field survey report is based on five years of field activities done in Piatra Craiului area and related to large carnivores management and livestock depredation, as a major source of possible conflicts between human activities and wolves, bears and lynxes from the area.

This study was carried out in the frame of the LIFE Nature project "Enhancement of Piatra Craiului National Park" (LIFE Nature 99/ANT/RO/006435, time period 1999 - 2004) financed by European Union through the LIFE program. The project aims to integrate large carnivores management in the local context, by active involvement of local communities in nature and protected areas issues. The mitigation campaign was launched taking into account the existing situation from the area, where there are significant grazing activities in an area populated by large carnivores, a situation which occurs in many other locations in Romanian Carpathians.

In the area, the traditional activities are still present in a significant manner, without technical progress and infrastructure development major influences (photo 2).

The traditional way of life, as grazing, mowing and even the logging are maintained and this have to continue in the future because a part of the natural environment evolved along the time under its influence and the unexpected end of these activities could lead to landscape change and decreasing the number of species from park and vicinity.

The hunting is one of the traditional activities, but in the last years was prohibited inside the park area. Still there are poaching activities that affect the game species, especially chamois, within the park borders. In the last ten years, the rural tourism was a successful activity, being about to become a significant source of income in the park area (Magura, Pestera, Dambovicioara and Moeciu villages).

One of the main activity in the park is grazing on pastures and alpine meadows (photo 1), which last from hundred of years of coexistence with large carnivores. In the last period, the intensive grazing activities on park alpine meadows had influenced both the habitats and wildlife species from the area.

Objective of the study

The general objective of the survey was the implementation of modern measures to protect the livestock, measures that could contribute to a significant decreased of conflicts with large carnivore and to decreasing of alpine habitats degradation. 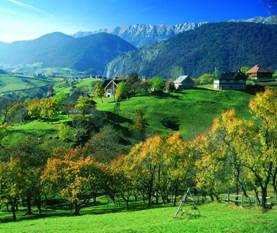 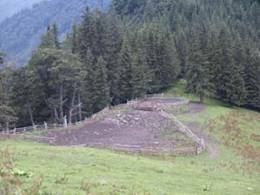 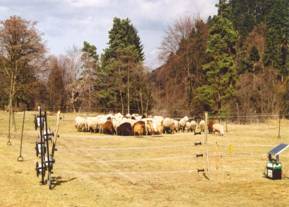 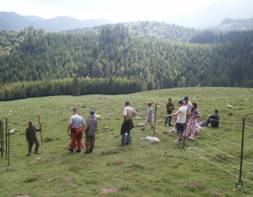 The activities carried out in the park area were focused on large carnivore damages, implementation of new protection methods against large carnivore attacks, flora and soil impact reducing by rotation of night enclosures (photo 4), identifying grazing routes that have a significant impact on erosion, public awareness campaign regarding conflict mitigation and conservation support, support for sustainable use of local natural resources, pastures amelioration through allowed measures and support for future implementation of wildlife management plans in the area.

The stakeholders information and regular consultations were done by contacting the sheepfold chiefs, the forest and hunting units managers and the local councils and farmers. The main results of this action are related to a database of grazing activities (persons, number of livestock, grazing areas, surface of pastures, etc.), gaining support from informed local stakeholders and grazing agreements signed with Dambovicioara and Moeciu communes that own the pastures form borders.

The information and conflict mitigation campaign was based on direct meetings and regular contacts with the local stakeholders. To persuade the shepherds about the opportunity of implementing the electric fences, several meetings were organized together with the local stakeholders, Piatra Craiului National Park Administration and the project team. At these meetings, the shepherds were informed about the practical advantages of electric fencing use and about the previous experiences of electric fencing and prevention of large carnivore damages caused to livestock. There was highlighted the importance of regular rotation of night resting places and were presented the sustainable grazing schemes and their role for the alpine meadows ecosystems. During these meetings, we noticed a preliminary negative attitude of locals regarding project activities but after an information period and several meetings, the situation changed significantly. In order to continue these activities, the shepherds should be regularly monitored by the park administration.

For crops and orchards protection located around we have installed in 2003 and 2004, electric fences that were effective related to bears and other wildlife damages prevention (photo 5). This fact had a significant contribution to a positive local attitude related to project activities. Together with the park administration, the project team had several interventions related to bears that approached the local houses in the park villages. These interventions were successful and the locals had a direct benefit from the project activities.

The shepherd camps monitoring had the following outputs and conclusions:

- All grazing areas within the park zone were delimitated and mapped (fig. 2);

- All grazing routes passed the forested habitats and were noticed significant grazing activities in the forests around alpine meadows;

- The monitored grazing includes four types of forested habitats and five types of pastures. The grazing activities are not selective in relation with habitat types but the main parts of these activities are carried out on dry pastures and mixed forests habitats. Also, grazing in young mixed forests (regeneration) was found and in some areas this fact had led to significant soil erosion (fig. 4).

The lowest erosion intensity was found on dry pastures, parts of successive wet pastures and parts of clear mixed forests.

- Electric fence use is a new method for protecting Romanian livestock. Therefore, we have observed a reticence of shepherds regarding this method but through an information campaign and direct contacts between project team and them we have gained their active involvement and the effectiveness of these fences led to the fact that 70% of them accepted the use of the mobile fences systems.

- At the beginning of the electric fencing activities, the project team regularly moved the night resting fences but after few weeks, the shepherds started to move regularly the fences, supervised by a member of the project team. This supervising activity will be continuing by the park administration.

- Sometimes, the shepherds forgot to power on the electric source of fences but through regular monitoring, they get used with the new method and followed the rules for a correct use.

- The shepherds tend to exaggerate when they declare the damages, in order to get more money from hunting units administrators or from insurances companies. This damage evaluation is a problem that has to be solved in the future. ICAS is already initiating several actions that will address this issue and we look forward to find national partners for developing an insurance system that could be used by the majority of Romanian livestock owners. Nowadays the insurance fee is relatively high and is not attractive for the livestock owners. Also, there are no experts for damage evaluation and this is done on a bureaucratic way.

- The electric fencing had immediate results and livestock damages level was significantly decreasing. Thus, in 2001, when the traditional methods were used for livestock protection, the damages were 1.23 % of the total number of livestock. After the prevention methods started to be implemented by the project, the level of damages have significantly decreased: 0.49% in 2002, 0.17% in 2003 and 0.44% in 2004 (fig. 1). Regarding the situation in 2004, we would like to mention that the number of daytime large carnivore attacks was increasing and during daytime the livestock are not protected by the electric fences (on daytime livestock are grazing on itinerary). 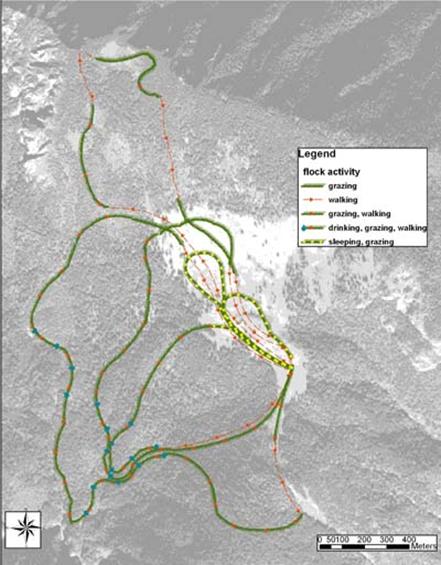 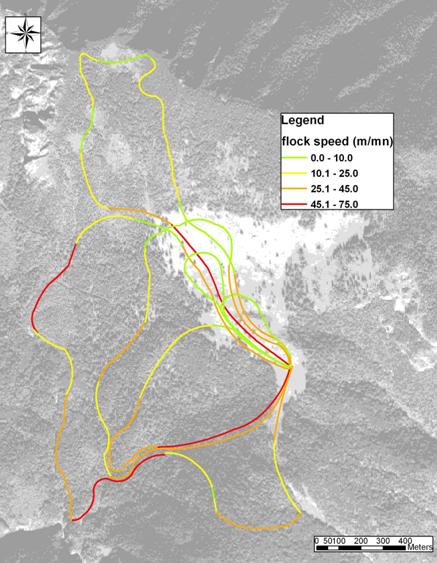 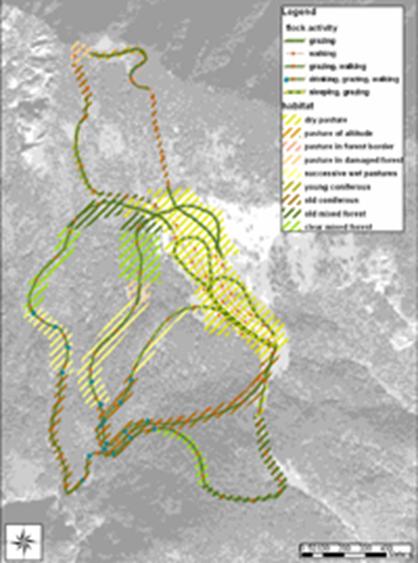 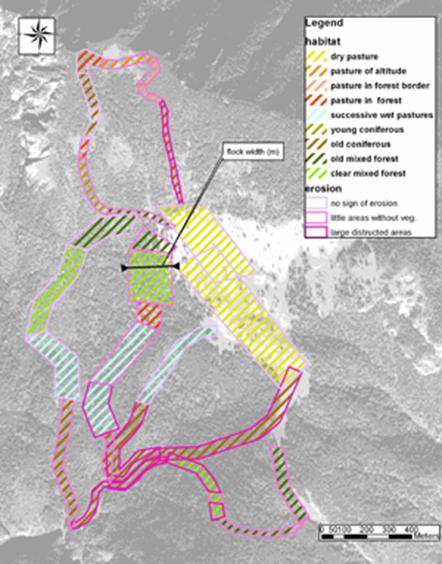 There is a need of continuation of these activities in the next years. The ICAS project team will support the national park administration by providing the electric fencing equipment and by training the park staff on issues related to use of the mobile electric fences system and monitoring grazing activities. Based on the future gained data it could be implemented an integrated grazing management system in Piatra Craiului that will use electric fencing for livestock protection, insurance system for damage prevention and sustainable grazing on alpine meadows. In this respect, we consider that is essential to have a close cooperation between all the relevant stakeholders and to use nature conservation as a benefit for local people.