Once the Lehmans collapse, the entire real estate market took a 180-degree turn, including the local one, due to the financial market deadlock. The residential market slid into a complete resting point, where nobody can sell anything, anymore. The office market, however, remained mildly active. We can still see lease-agreements concluding, but many developers are hesitant on whether they should continue their projects or block them, amid rising financing costs. The only special segment is the industrial one, where products evolve against the trend

The rising market in 2007-early 2008 has changed radically, and the fundamental aspects, such as rents, land prices and constructions changed and keep on changing dramatically.


After rising by as much as 50% y-o-y in 2007, house prices in some districts of fell in the first quarter of 2008. Although estimates of the price crash range from 10% to 25%, the general consensus is that the 5-year house price boom is over.

While real estate prices have been constantly rising since 2002, prices of old apartments in jumped by about 160% from 2005 to 2007. In some parts of , the increases were much higher.

Demand for Romanian properties rose in anticipation of EU accession in January 2007. A year after, investors were disappointed with the rate promised reforms are taking place. Corruption is rife and largely ignored (or tolerated) by the government.

Foreign buying had been enormously important in pushing up house prices, as Romanian property was a significant bargain in trans-European terms. was advertised alongside as the land of opportunity for British and other foreign buyers.

Investors who took euro-denominated loans to join the housing boom are now affected by higher interest rates and the depreciating Romanian new leu (RON). The ECB raised rates key rates four times from 3% in Sep 2006 to 4% in June 2007, where it remained until now. After appreciating strongly from RON 3.42 per euro in 2004 to RON 3.2 in mid-2007, the currency depreciated to about RON3.70 in the first quarter of 2008, to 4.2 in January 2009.

The selling price for apartments in the centre of ranges from 3,900 to 4,400 per square meter (sq. m.), according to Global Property Guide research.

There are no restrictions on foreign nationals acquiring dwellings, but ownership of land is a bit tricky. Companies incorporated in as well as resident-foreign nationals can acquire land. Non-resident EU citizens can own land starting January 2012.

Despite the world real estate crisis, the Romanian market continued to have the most dynamic development within the EU in 2008, a National Prognosis Institute report shows. Thus in the first semester a 33.3 % increase registered with a GDP contribution of 8.1%.

In the first 8 months of the year, the activity of the sector increased by 31.5% as compared to the similar period, in 2007. Eurostat, gathering up data from all 27 member states, showed that registered the fastest growth pace in the EU despite the decrease of the sector in other EU countries.

An important indicator for the real estate dynamics is the number of authorizations released for the construction of residential houses:

of the total authorizations, 61.7% were for the rural area

The average rent price in recorded in 2008 the highest level in the past 10 years, reaching 26 Euros per square meter / month in well-placed downtown areas, the DTZ Echinox consultancy company informs. The price is expected to drop 10% this year, since many companies target smaller offices, with lower maintenance and rent costs.

'The rent level had an ascending trend during the past years, with 2008 recording the highest level in the last decade, up to 26 Euros per square meters per month'.

Other real estate agencies, like Re/Max Bastion, estimate that companies will move towards less wide office spaces, with lower costs in both maintenance and rent. Company consultants say that the average price is expected to drop between 5 and 10% in some areas and 10% downtown.

In 2008 more than 3.750 residential units were finished, the number being double compared to year 2007 (CB Richard Ellis-Eurisko Report). The total sales fell down because of the lack of credits granted by the Banks, and that created o market blockage at the beginning of 2009.

Since September 2008, no credits were being granted for real estate Projects. Furthermore, the projects under construction no monger received credits to finish the estates which determined a negative evolution of the prices. The prices decreased with more than 30%: eg. The prices in Otopeni fell from 1.500 Euros to 900 Euros per sqm.

The number of real estate deals in Romania decreased about 25% on the year in the last four months of 2008 and the number of deals for the entire year 2008 decreased more than 7% compared to 2007, the Romanian Union of Notaries Public, or UNNPR, said in a press release Thursday. 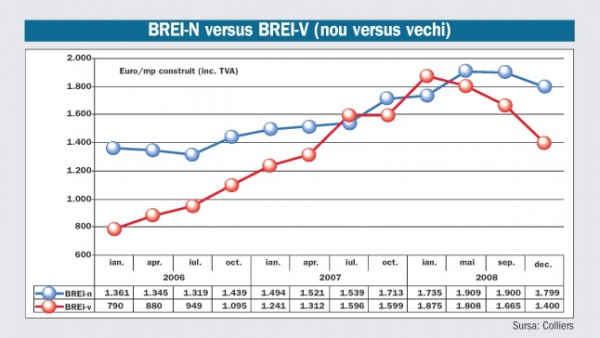 The downward trend that the realty market started on in September maintained in December as well, when the number of deals reached 33,000 compared to over 50,000 in December 2007, decreasing about 35%.

The biggest decrease was registered in November, when the number of deals was down 54%, compared with slowdowns of 15% registered in September and October.

At the beginning of 2008, Romanian notaries estimated tax collections would increase about 30%, based on continued price increases on the real estate market.

Taxes on realty deals range from 1% to 3%, depending on property value and acquisition date.

Average per square metre (sq. m.) prices in US$/ of 120-sq. m. apartments located in the centre of the most important city of each country, either the:

Rental income earned by non-residents is taxed at a flat rate of 16%. A fixed deduction of 25% of the gross income is allowed to account for income-generating expenses. Taxpayers may also opt for itemized deductions of all expenses.

A landlord in has the legal obligation to pay the taxes levied on income from property, except in the case of a foreign landlord, when the tax is withheld and paid to the state by the person paying the revenue, meaning the tenant.

As of 01 January 2008, taxpayers who earn rental income from more than five simultaneous rental contracts can only be taxed under the direct method (gross income less itemized deductible expenses).

Individuals who sell Romanian property are liable to pay transfer tax, levied on the sales proceeds. The applicable tax rate depends on how long the property was held by the owner and how much the actual sales proceeds are.

VAT is levied on sale of real property. However, this ruling is not applicable to transfers of real estate from a natural person to a legal entity, or for transfers between individuals.

A local tax is levied on land in , payable by the owner. The tax rate for urban land ranges from RON0.001 and RON0.59 per square metre for land in urban areas. Land outside urban areas is taxed at a fixed rate of RON1 (3.51) per hectare.

House prices continued to drop significantly across the country, compounded by the turmoil of the current financial crisis.

Beleaguered banks continue to charge high interest rates even for customers with good credit standing and larger equities. This makes acquisition of new mortgages even harder. An increasing trend of foreclosure properties triggered this decisive intervention by the government to try and salvage the mortgage market.

With high rates not expected to come down soon, houses remain idle across the country.

Home values continue to fall, which experts say may not shift direction until the later months of next year. This will put investors at risk and might consider putting their homes up for rent, in a bid to thwart possible foreclosures.

The only hope in the horizon for these homes would be for bargain hunters to come and shop for foreclosed homes which may help bring the industry back on its feet and put prices back to competitive and profitable levels.